O'race ready to run in March!

The beloved O'race traditions will continue in 2018, with some fun new St. Paddy's themed perks.  Picture seas of green swag, map of Ireland medals and festive music to keep you moving through each 3.1 mile race, with cold beer and hot food awaiting after each finish line. 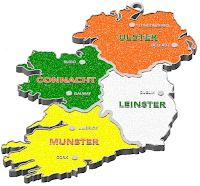 There are two options for challenges to beef up your bling: the 3-race Trinity Challenge or the 4-race Lucky Challenge.  Earn the map of Ireland, each county in Ireland is represented by one race finish medal - complete the full map with all 4 races!  NOTE - 3-race participants must include both the Courthouse O'Putnam 5K and the O'Niantic 5K for their three race medals to connect.

Each race has a different party vibe and unique swag so challenge participants can boost their Irish-inspired wardrobe:
O'Shenanigans, Southington (March 10) – custom sunglasses for all participants and craft beer from Kinsmen Brewing Company to celebrate post-race.
Courthouse O'Putnam (March 11) – green knit gloves are the swag you'll earn, then re-energize on delicious corned beef sandwiches served on pretzel rolls provided by Courthouse Bar & Grille (coupled with a cold beer, of course!).

O'Niantic (March 17) – themed socks for all (new design available for 2017 runners who have them in the collection already!).  Post-race party at Smarty's Restaurant and Pub with hot chili and cold beer
O'Hartford (March 18) – keep your noggin warm with a custom knit beanie!  Plus NEW race route and post-race party location at Thomas Hooker Brewery at Colt, details HERE!

NEW bundle race registration option is now available to us through Chronotrack - REGISTER HERE (if you've already registered for one or more race and want to add more to complete the series, just register for the other individually - make sure you use the same email address, last name and birthdate for all event registrations).

Each race has costume contests - most festive and original!  Check out last year's race parties and register today to reserve your spot:

Our race season may have ended last week but the HMF office is buzzing with activity!  2018 planning means scheduling details, securing permits, engaging sponsors (have any ideas for us?), reviewing swag, assessing courses and working on new ways to keep you inspired in the new year.

Check out the start of the 2018 schedule, including updated challenges, which we'll be highlighting in coming weeks - look for new race combos, fresh swag and great big bling.  Plus, the introduction of the HMF "30K under 30" to rally young professionals to get running together for fun, health and happiness!

We've got more in the works but want to share the scoop on what's what with changes in store.  Updates to some perennial favorites include:

Speaking of last dances, we’ve had to say good-bye to a few HMF races for 2018. We know some of you have loved these events, but dwindling registration has forced some tough choices.
We’re still hard at work on a few new events that'll roll out as details are buttoned up.  Have ideas for us?  We’re always ready to be inspired!  Email me, beth@hartfordmarathon.com
Posted by Beth Shluger, HMF Events (Hartford Marathon Foundation) at 11:47 AM 1 comment:

It’s holiday shopping season – are you hydrated, well nourished and prepared for what’s ahead?  Hustling in and out of stores, waiting on lines, schlepping bags…it’s a marathon effort for sure. 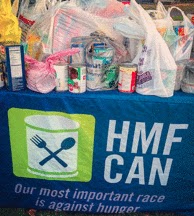 Reward yourself with major steals and deals at our annual warehouse sale next Friday and Saturday (December 8-9).  Get extreme discounts on race swag and limited inventory merchandise from previous years – shirts, socks, hats, pint glasses, accessories etc. Fill the stockings of runners on your shopping list with great buys!

Your ticket to enter the Warehouse Sale is a donation of non-perishable foods to support the HMF Can drive.   Bring ten pounds or more and you’ll be entered to win free entry to a 2018 HMF race.  We’ll also be raffling swag prizes throughout the sale to benefit the HMF FitKids in School program.

Plus, start off your shopping day on Saturday with a free group fun run with us before the sale starts.  Meet at HMF in the parking lot for an 8:30 am 5K fun run.  Coffee and bagels available for run participants before you shop the sale.

Posted by Beth Shluger, HMF Events (Hartford Marathon Foundation) at 7:52 AM No comments: