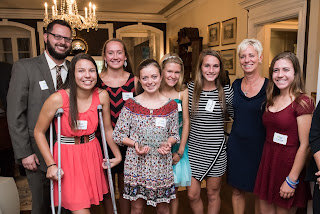 Tolland High, Girls Track
This spring, the team from Tolland won the outdoor track State Open title by two points against Windsor to become the first girls team to win all three State Open titles in the same school year. The Eagles won the State Open title in cross-country over Glastonbury, the indoor title over Wilbur Cross and the outdoor title with 52 points against the Warriors. The State Open titles in both indoor and outdoor track were the program's first. It was the Eagles' second straight State Open title in cross-country. Tolland was a perfect 6-for-6 in state championships, which includes three class titles. Team standouts Caitlin Swanson, Julia Sprout, Kat DeLoreto, Karissa Laramie, Taylor Hall and Hayley Collins; and coaches Corey Bernier, Judi Lafontaine, and Brandon Elliott accepted the donation on behalf of their program. 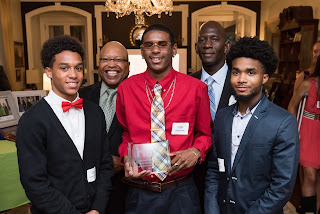 The Windsor team spent the first two months of the season dealing with injuries, but it all came together at the end of the outdoor track season. The Warriors peaked at the right time, winning the Class L title over Wethersfield and the State Open championship over Danbury. It was Windsor's second State Open title since 2012 and fifth straight Class L title. Windsor had three of the best relay teams in the state (4x100, 4x400 and 4x800) and the best 400-meter runner, Courtney Rush. The Warriors won the New England title in the 4x100 and were second in the 4x400.  Windsor athletes Kyshawn Bonner, Timothy Epps, and Jakwan Simmons; and coaches Kelvin Kearse and Ronald Wilson accepted the donation on behalf of their programs. 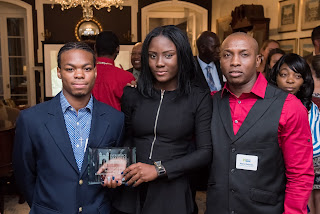 The Weaver track program is one of the smallest in the state, but that hasn’t held them back. Last winter and spring, the team found its stride with help from sophomore Mark Doyley, who became the fastest runner in the state. After winning both the 100 and 200 at the State Open during the outdoor track season, he finished the year with a New England championship in the 200 with a time of 21.16. Doyley was also the best 55-meter runner during the winter season.  Coach Andre Shreeves, Doyley, and teammate Tianna Robinson attended the kickoff reception to accept their donation.