Run Wild this summer! We're loving the great weather we’re (finally) experiencing in Connecticut.  All that spring mud is giving way – it’s time to hit the trails for peaceful runs and explore some new territory.

If you don’t know about the Blue-Blazed Trail Running Series, you should!  Our Summer Solstice Trail Run on June 16 in Hebron is part of this year's series. Emma Palmacci organizes the series and is sharing the inside scoop on the 90 year history of local trails (don’t forget about our free fun run on June 5 – hit the trails with HMF!). 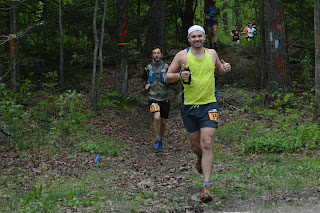 The Connecticut Blue-Blazed Hiking Trail System turns 90 this year.  Spanning 96 towns and 825 miles, this expansive network of trails is maintained by the Connecticut Forest and Park Association (CFPA), the state’s oldest non-profit conservation organization.  The Blue Trails are some of the best outdoor options the state has to offer - steep, ragged ledges, smooth river walks, vistas at Soapstone Mountain and Talcott Mountain, lush pine forests, and gorgeous waterfalls.

The Shenipsit Striders have been using, and racing on, the Blue-Blazed Hiking Trails for the last four decades.  The Striders have forged a strong relationship with CFPA, donating a significant percentage of their race proceeds to the non-profit.  We appreciate that there is a natural, symbiotic relationship between trail running and trail stewardship organizations.  Runners are a passionate bunch!  When we learn what goes into building and maintaining the trail systems, we become fervent supporters of those who work to protect our shared outdoor spaces.

We saw the opportunity to strengthen this relationship and to bring greater awareness to the running community about how important groups like the CFPA are to our sport.   And so the Blue-Blazed Trail Running Series was born.

The original idea was simple - bring together trail races that utilize the Blue Trails to reach a greater audience across the state.  The power in numbers would increase awareness for CFPA’s efforts and bring more people out to Blue Trail races to compete for the running series trophy.  The races in the series would donate some percentage of the proceeds to trail maintenance groups.  Win-win-win.

This year the Blue-Blazed Trail Running Series is celebrating its fifth anniversary.  Last year was one of the biggest series yet, with 838 individuals competing in at least one race – making for ~18,000 miles raced on Blue Trails over the course of the series.  While the Shenipsit Striders and CFPA still take on much of the grass roots effort, it’s become a group effort across volunteers and race directors - with CT Trailmixers, Bimbler’s Bluff, and Steep Endurance all helping spread the word and promoting the series.  Three new races were added to the series for 2019, the Macedonia Trail Race in Kent and the HMF Summer Solstice in Hebron and the Tunxis Ultramarathon added an 8K option.