The path to each race participant's start line is different.  Some have just started to feel that excitement and are new to experience how motivating a goal race can be.  Others can't get enough of the energy a goal race conjures up.

While our start lines will be in various locations next month for the virtual UConn Health Half Marathon, 10K and 5K, we are still connected by our paths to this shared goal.  Over the next month, we'll be sharing stories of people along those various paths.  Learn a little more about those we're running "with" and help us celebrate the UConn Health professionals that we will run in honor of. 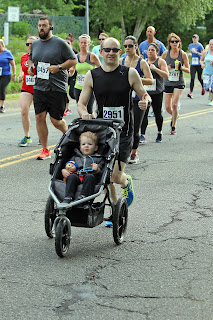 At 39 years old, Kevin Verge was doing everything right to actively manage his health. Training for his 9th marathon in fall 2019 had him feeling the fittest he'd ever been; which is saying a lot for a former captain of Columbia University's track team who started running races with his father at 7 years old.

Just two months later though, Kevin suffered a massive cerebellar stroke and was admitted to the Intensive Care Unit (ICU) at UConn Health in Farmington.  The outlook was not positive. A blood clot had traveled to his brain and broke into three pieces, causing three simultaneous strokes.  The severity of swelling in his brain upon his admittance raised grave concern about the need for surgery.

But that didn't end up happening.  Kevin credits his recovery on the commitment and well-coordinated team efforts of the highly effective doctors and nurses who excelled in a very time-sensitive and high stress situation.

Kevin spent nine days in the ICU with his family by his side, day and night.  His team of doctors and nurses became an extension of his family, championing Kevin's recovery with thoughtful care and attention.

"I will forever be grateful for the tremendous care I received at UConn Health.  They operated as a team and remained focused on my well being. But it's not just the doctors who went above and beyond - the ICU nurses responsible for administering medicine  kept me focused and motivated to make it to the next day and meet my next milestone."

Kevin fondly recalls his ICU nurse, Christian Tuesta, who stayed with him during procedures, always provided a positive presence and consistently made timely jokes to bring light to a dark situation.  Dr. Perez, who oversaw the ICU team, worked to keep Kevin's vitals stable, allowing the stroke treatment to be effective.

"When I walked out of the ICU, I don't know who was happier for me - my UConn Health team or my family."


With an alarming history of clotting on his father's side, Kevin was proactive about his health to be "ready to fight" if any hereditary issue came up.  Kevin had no previous issues, but his father had a pulmonary embolism at 42 years old and a pacemaker inserted at UConn Health in December 2019 by Dr. Heiko Schmitt, Cardiology.  Dr. Schmitt thoroughly evaluated Kevin and continues to closely monitor him to determine if the family history of heart conditions could have caused Kevin's stroke.

Kevin credits the unrivaled level of expertise at UConn Health with his success, walking out of the ICU in January and supporting him back to a normal life.  He returned to his job as Vice President & Counsel for Pratt & Whitney and has since joined the Board of Directors of the Hartford Marathon Foundation.

Two years after pushing his now 4-year-old-son Liam in a stroller through Simsbury in the 10K race, Kevin will run the UConn Health Half Marathon.  His training is well underway and he even has his race route planned.


"The mission of HMF resonates with me and it has throughout my life.  I'm incredibly honored to be in a position to participate in the UConn Health Half Marathon as my first race after my stroke. It may be virtual but it's still very meaningful for me."

For details or to sign up for the UConn Health Half Marathon, 10K, 5K virtual race weekend, please visit https://www.hartfordmarathon.com/uconn-health-half-marathon-10k-5k-on-iron-horse-virtual/