The weather is looking great this Saturday for teams to take on the 95-mile RiMaConn Relay, presented by Webster Bank.  The relay for teams of three or six members will start in Lincoln, Rhode Island, run through Massachusetts and then into Connecticut to finish in Hartford.  The whole relay has 18 legs, with a special WilliHart Relay consisting of the last 6 legs for two groups of youth runners.  The two teams made up of current and former high school students from Manchester and Hartford will be hitting the course from Willimantic to Hartford.

Unfortunately, the pandemic has discouraged new students from joining the HPHS team and his roster has thinned. Not to let this opportunity pass, Mitchell knew he had created a special bond with some of his recent graduates and thought the relay would be a great experience for them.

“As a coach, one of my goals is to help foster a lifelong love of the sport and this is an indicator that I am reaching that goal,” said Philip Mitchell. 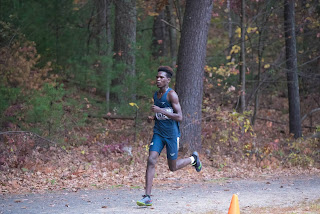 Coach Mitchell says not only is he excited for his current and former team members to compete together again and experience the WilliHart Relay as part of RiMaConn Relay, but for several of the runners this is their first road race experience.

Meet the team from Manchester High School:The team is coached by Steve O'Reilly. This will be his 14th year with the program and 12th as head coach. His Assistant Coach, Mike Bendzinski, is coaching his last Cross Country season this year and has been with the team as either head coach or assistant since 1992.  The WilliHart Relay team runners are:

“We are definitely excited to have this opportunity to do something fun and a little different to help the team bond and stay fit,” said Steve O’Reilly. They have six of their veteran runners taking part in the 36-mile relay. The boys have been training all summer long to work together for the relay. Coach O’Reilly hopes this event helps them to start their season off right by emphasizing the importance of teamwork.

Manchester competes Scholastically in the large school division for XC in the state of Connecticut.

This relay teams will end at Mortensen Riverfront Plaza in Hartford, CT, with the rest of the RiMaConn Relay participants.  The post-race party runs until 9:00 p.m. and features live music, local craft beer from Hog River Brewing for participants 21+, delicious ice cream from Royal and gigantic burritos!